Let me first say that I really DIG the name of this donut shop….

Let me first say that I really DIG the name of this donut shop….

Who wouldn’t want to go to a place named “Spunky Dunkers” ?

Now, I’m not even a big donut person, truth be told…
but seriously, I couldn’t stop repeating this the day my car drove me in this direction…spunky dunkers, spunky dunkers….spppunkky dunnkkkkerss….
(and no, I do not stutter).

I tried some Spunky donuts at Spunky Dunkers….some were even spunkalicious…in fact,
I even felt a little *spunky* after ingesting a few of these spunksters…and no, I didn’t do any *dunking*.. 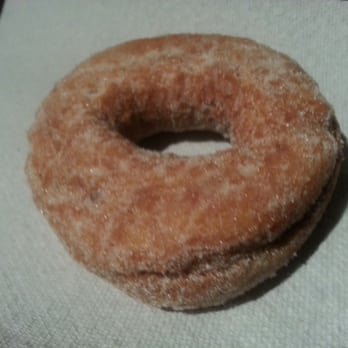 Out of the dozen I picked up, I only chose 6….
(split the rest…).
I had to refrain from being greedy, because there were sooo many varieties I wanted to taste..
Here’s what I got:  Buttermilk (my fave), Pumpkin Cake (tis the season), Apple Crisp Cake (tis the season), Honey Dip, Sour Creme (I love anything with sour cream) & Powdered Bavarian (another fave).  Totally slipped my mind to pick out a chocolate or French Curller….Duh..
I know…but, I didn’t want to look like a donut *Heffer*.

I was ECSTATIC they had all flavors available walking in late afternoon…AND they were all FRESH.  Major points for offering Buttermilk, Pumpkin & Apple (I was going through Apple donut withdrawals ever since Goebbert’s was sold out).

The donuts appeared average looking – nothing fancy about them, but they were XL in size..
A few flavors were better than others…I especially liked the Honey Dip…so simple, yet the raised donuts have always held a special place in my heart…the perfect bite of airy, light dough, with that sweet glaze….so fresh and spunkalicious.  Buttermilk was really moist and met my expectation..  I liked the Pumpkin Cake more than the Apple Crisp (w/tiny pieces of apple mixed into the batter)..which was on the dry side with little “apple” flavor…Sour creme donut was similar to Buttermilk but with a crisp exterior…I would pass on this next time…

The best tasting, most spunky donut I had?  Powdered Bavarian, BY FAR…. 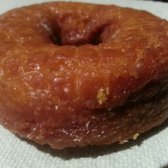 This little piece of heaven was delicately soft, puffy, pillowy, subtly sweet…my mouth was on auto pilot…
The cream filling…ohhhhhh…the cream filling!  I swear it was doing somersaults around my tongue….cartwheels too…my mouth became a gymnasium of creamy coated, light, smooth…pastry cream-like, not-to-sweet, just the way I like it – – YES! “I’ll take another please” DONUT!

Other than the Olympics going on above ^ – ^ the donuts were average, yet solid…I’ll just say, nothing else screamed my name (or a 5 star)….

I’ll be back in December for the Flavor of the Month..EGGNOG!  (Peppermint & Gingerbread offered too)..along with a Bavarian Cream & Buttermilk & German Chocolate Cake donut… 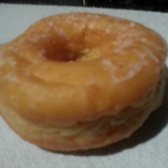 At $12 a dozen, that’s quite a steal…AND for offering freshly made, great flavors, in a retro-diner feel shop.. the verdict is 4 stars for Spunky Dunkers..
Now…you go get your *spunk* on too…

For the love of all things strawberry!February 26, 2013

Let me first say that I really DIG the name of this donut shop….No Comments

For the love of all things strawberry!No Comments

I have a thing for doughnuts.No Comments